I think the Krampus is an amazing bikepacking platform. I’m sold on 29+ for this type of riding. I’m keen to tweak my setup and get the most from it without becoming a gratuitous bling-whore. After making some changes over the winter I wanted to field test them so I headed out for a 3 day Gravel Pimping adventure with my buddy Michael who has been wanting to get his bikepacking rig into action for a while now. We rode from Port Alberni to Cumberland and back in the reverse loop of a route I used previously. Michael is doing a ride report which I’ll post when he’s got it done. In the meantime I thought I would do a rundown of my mods with some thoughts on how well they worked.

This trip was not very technical. There were some rough sections for sure as well as paved sections. I really didn’t notice the suspension fork much either for the good or the bad. The steering geo seemed fine and there was no issue with tire clearance in the fork. Looking at the dust marks on the stanchions I used about 100mm of travel during the trip which is a fair bit, but from the saddle that never seemed obvious. I’m going to wait until I get a more technical bikepacking trip under my belt before I make any decisions about what to do with this fork.

I will say that having ridden the same route rigid [as well as two trips to the Chilcotins rigid] that the Krampus and its 29+ tires really smooth out rough terrain even without the benefit of suspension. I’m too lazy to go swapping forks back and forth for each trip, but I certainly wouldn’t feel any need for a suspension fork on a GDR style Gravel Pimp trip. It just adds weight. maintenance and an extra failure point.

One fork related thing I didn’t like was the bar height. Since this was a used fork with a cut steerer I had to place the bars a bit lower than my previous setup. That wasn’t as comfortable. Especially for long non-technical sections with less body movement. I’ll be trying a new bar with 3/4″ more rise to see if that sorts the problem out. 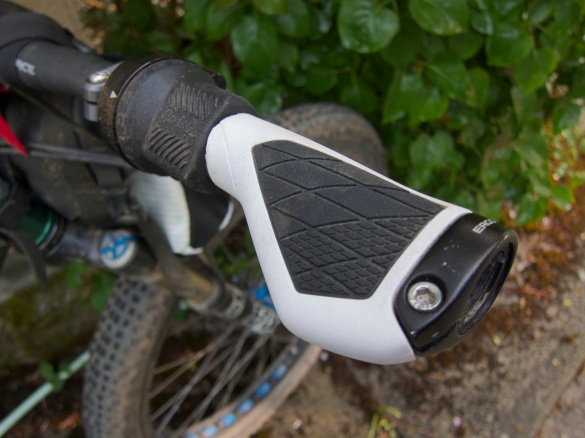 Comfy, but no bar ends…

Previously I had some Egon grips on the Krampus that look like the ones in the photo above except they had built-in bar ends. I really liked them and was sad when I crashed a wrecked one of the pair. I had these white ones in my parts box so I used them instead of buying new ones. They were comfortable as I have grown to expect from Ergon grips, but I missed the lack of a bar end which provides a nice change of hand position for long days in the saddle. Adding external bar ends would push the grips and controls too far towards the centre of the bar so I’ll bite the bullet and buy some new Ergons with built-in bar ends.

Not as comfy as leather…

I’ve been a die hard leather saddle user for a number of years now. I can ride all day for weeks at a time in total comfort on leather saddles without needing a bike diaper. I was interested in finding a lighter and cheaper option which lead me to the WTB Pure V for my trail riding needs. I find these saddles very comfortable for 3-5hr trail rides without needing any bike specific padded shorts. On tour though I found they were not as comfortable when I moved around the bike less and spent 8-10hrs riding per day. They weren’t awful, but when you are used total comfort in the butt region some mild discomfort seems like a big deal. So I’ll be going back to a Brooks B17 for the Krampus. The WTB saddle will get used on my trail bikes.

I realize there may be other plastic saddles I might like better, but I have enough Brooks saddles and WTB saddles in my garage to last me a while so I’m just going to use them. 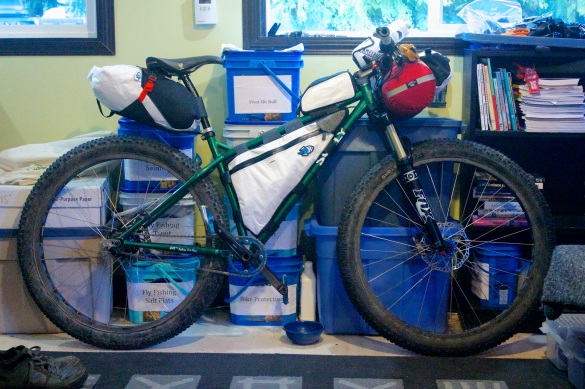 This is Scott’s new minimalist bikepacking bar bag setup. I don’t have a great picture of it handy so jump over to his blog post about it to see the details. His previous setup had a fabric bag that stayed mounted to the bars that you stuffed with your gear and rolled up at the ends to close it. They new setup gets rid of the bag and replaces it with a dry bag [you provide] that loads from the front. I didn’t have much negative to say about the old version. Mine was a bit tight for my sleeping bag in a dry bag when I was loading it in the morning, but that was the only 5 mins of the day where it wasn’t awesome. The new setup gets rid of that one annoyance and is lighter. The new system lets you pack your bag away from the bike and then just pop the dry bag onto the bars and ride away. Nice if you are not sleeping right by your bike.

Overall it was easy to use and kept my gear in place just as well as the old system.

One issue to be aware of is that your dry bag is vulnerable to damage since it’s not covered with any other fabric. It’s also the only thing keeping your gear together on your bars. If you do a lot of bushwhacking through thorny vegetation or are on a long trip and are concerned about wear and tear you may want to cover the dry bag with another bag that has tougher fabric.

Once again I’ll suggest you jump to Scott’s blog for detailed photos of this new seat bag setup. The main difference between the new system and Scott’s older one is that it uses a metal frame + harness to stabilize the load. That means as you bomb down a rough trail your seat bag isn’t flopping around. A secondary feature is that the bag itself can be removed from the bike in a couple seconds and carried elsewhere so you can easily camp away from your ride. I found this new design to be a lot better than my old bag mostly due to how stable it was on rough terrain, but also I liked just grabbing the whole bag and loading/unloading it at my campsite.

One extra benefit we noticed on this trip [Michael used my old PR seat bag] is that the new version once set in place didn’t move vertically. While the old bag on Michael’s bike would sag a bit under its own weight when hammered down a rough road. This ended up with the bag rubbing the tire a couple times due to a combination of a tall 29er tire and a short exposed seatpost. Because of the metal tubes and the clamp on the seatpost once you get the Mr. Fusion adjusted for your bike it stays where you put it.

The frame bag I had been using on my Krampus the last couple years was built for a different bike. It fit well enough that I couldn’t be bothered to do anything about it, but last summer when I was on tour with Scott I could tell the crappy fit of the bag on the Krampus made him sad and I did feel a bit guilty because someone might assume he built that bag for my Krampus and just didn’t do a good job. So I got a new custom fit bag this year. Not a lot to say about it. It fits great and is well constructed like all of Scott’s gear. He made it pretty narrow compared to the old bag which I think is Scott’s way of telling me I carry too much damn stuff on tour! 😉